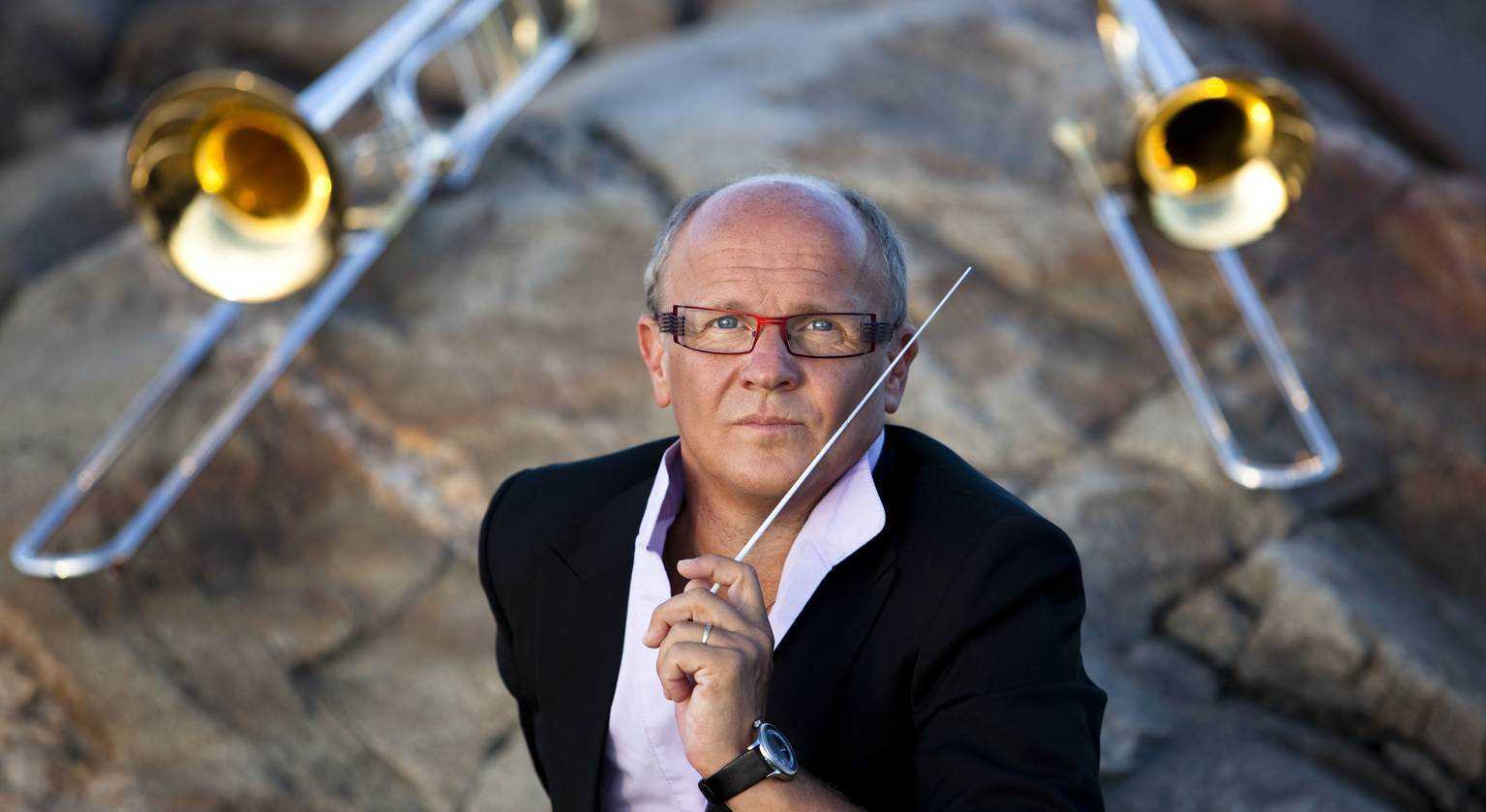 Posted at 15:12h in Music, Musician by Beautiful Humans

Awarded Artist of the Year 2016 at the International Classical Music Awards and voted The Greatest Brass Player in History by Classic FM, Maestro Lindberg has recorded more than 70 CDs, premiered over 300 works for the trombone, composed over 50 works on commission, and is now leading a highly successful career as a conductor. Recently appointed as music director of Israel Netanya Kibbutz Orchestra, I had the most delightful time speaking with Maestro Lindberg about life, his very structured daily schedule, music, and what it takes to live our dreams.

Victoria Adelaide: A few months ago, you posted a video on YouTube, showing your disciplined daily routine, where time for practice, composition, lunch, working out, yoga, and administrative work fit into a schedule by the minute. What prompted you to adopt such a lifestyle and how long have you been doing it?
Christian Lindberg: I have been doing it since I was very young. As a human being, I’m a chaotic person. I’m emotional and change moods easily. My parents were painting artists and it was like a free world. So for me, the only way to channel my energy was to create schedules. I started creating them when I was 16-17, so I have built this over the years. Then, I hired Gustaf Blix to be my public relations person. He is the grandson of Hans Blix. It was his idea to do this video. One day, he came to me and said, “Christian, everyone should know your schedule. It would be very interesting for people to see how you make your schedule.” I was a bit reluctant at first and then I said, “Ok I’ll do it.” So he forced me to speak about myself (laughs) and, in the end, it was very funny. I think he did a very nice video. (laughs)

VA: Are you practicing the lifestyle seven days a week?
CL: No, no. Of course, I have a normal life. I have a wife, I have four children, and I have three grandchildren. It’s usually in periods. I do it during free periods. Sometimes, I do it three days in a row, usually never more than nine days in a row. I can do it nine days in a row but then I start going crazy and I have to go back to my normal life again. But it’s extremely effective; it works so well. When I’m at a hotel, I also try. The other week, for instance, I was performing in Antwerp so, of course, I could not do it while I rehearsed. However, if I came back to the hotel from rehearsal at three o’clock, for instance, I tried to do this routine that I have.

VA: You said that when you rehearse you are extremely structured and non-emotional and you try to be analytical and practical. Can you tell us more?
CL: Well, it all comes down to the fact that I am, as a human being, the complete opposite. Since I was a child, I could have gone into a completely different direction and become a criminal because I was so energetic. I had to get my energy out somehow. If it didn’t work at school and if I didn’t channel it, it could have come out really badly. I was very lucky to find music.

VA: A while ago, you decided to go independent and created your own company. Since then, things have changed a lot in the music industry. Do you think the industry today is inadequate to suit artists’ needs?
CL: Yes. I think that in classical music, over the last 8-9 years, it’s become very corrupt. I don’t really know the reason but I think that maybe classical music in the 90s was extremely conservative. They had the recording industry and they had the CD market. The record companies were putting out all these CDs and then the record industry in classical music just began to fail. So, they became small; there was nothing there anymore. They were losing their audience because there was not enough creativity. To survive, I think many of the big agencies came together, in crisis and panic, and they started doing things I think were immoral. They were asking artists to pay for everything themselves. It came to the point where you didn’t become a big artist just because you were good but because you could get it by paying money under the table. This is what was happening and I saw it with my own eyes. I was with these big firms. I was almost ready to stop completely. Then, I told myself, I’m going to go my own way and try to keep my artistic integrity. If it doesn’t work, I still have my house and my flats in Stockholm. I can sell my flats, go to my place, and compose for the rest of my life. But the very exciting thing was that, in just two months, by doing it myself, I had created a much better situation for myself. That was amazing! (laughs)

VA: Do you think that just by ‘doing’ it absolutely fearlessly, helped you make it happen the way it did?
CL: Absolutely! I think so. We have to understand what we are doing and the reason we are doing it for. It’s not like a business. It’s not going to be like we are paying the drug commission for big companies that have employees that have to stay as employees. We are the artists; we are doing the art. It’s going to change dramatically in the future too, I think. I was amazed how well it worked. First of all, we were only four at the beginning: me, my wife, and two others. They worked on an hourly basis, not full-time. Then I realized that it was going very well, so I hired Gustaf Blix, and it’s flourishing; it’s wonderful! (laughs)

VA: Can you tell us about your mindset when it comes to art?
CL: I got my strength from my father. My grandfather was originally a simple person, working in a coal mine. He worked himself up to become one of the most important businessmen at the Åhlén-Åkerlund warehouse. He was so incredibly proud of that. Then, my father had this huge talent for drawing and he went completely against his father. He was never famous but he always had this enormous strength. He would say, “I will do this, just, whatever happens, money is not important.” I got this from him. You have to keep your artistic integrity and I got this from the beginning. My mindset was built this way. I took the decision when I was 20 to go my own way, regardless of what happens and I think it’s very important. If you want to be an artist, if you want to do art, you have to understand why you want to do it. You have to also not crave becoming famous. If you try to become famous, you can easily become corrupt. You have to stay within yourself and just do your thing, regardless if you are famous or not. My parents did it; they were never famous but they kept this integrity all the time. I learned that and, as a result, I became famous. (laughs) But it has never been my goal. My goal was always to stay completely true to myself. That’s the mindset I think.

VA: Do you try to get in touch with the Divine which is within?
CL: Absolutely. The Divine—you feel it and you can only get it by being alone in that path. You find it by being by yourself. This Divine comes unexpectedly; it comes from discipline. If you search for it, you won’t find it.

VA: What is your creative process?
CL: The inspiration comes by itself. There’s one philosopher that I’m extremely interested in; his name was Jiddu Krishnamurti. He was an Indian philosopher. He said so many true things. And that is my inspiration. When I write a piece, for instance, I start completely from nothing. Then, I create 24 different embryos. I always have numbers for some reason. I am very structured, as I said, stupidly structured. (laughs) I write 24 ideas for a piece and the ideas can be bad or they can be good. I don’t judge them. After I have written them, I check them and take one out at a time. I will find six or seven that I think to me are the most appealing. And that’s when I start to very structurally, every day, compose in really ten seconds each day in a one year schedule—composing one to ten seconds on the first day, and so on. As the piece grows, when I reach the end, I go back and do the same thing again. So, it’s really opposite to what the romantic ideas of creation are but, in the end, I get amazed because within this structured way there is also this wonderful free world of fantasy that comes and becomes crazy.

VA: Besides your musical universe, what kinds of other music styles do you like?
CL: For me, the big wave in music was The Beatles. Paul McCartney still is. He is unbelievable. I have a lot of favorites, such as Salif Keita. Another one is Eminem; I think he is fantastic and, of course, Prince, Bill Evans, Chet Baker, Steve Turre, Coltrane, Debashish Bhattacharya etc.

VA: Would you like to collaborate with an artist doing music totally the opposite of what you’re doing?
CL: I did some things in the past. I’d love to but it’s very different worlds, so I think it’s very difficult to mix.

VA: Are there any artists you’d like to collaborate with?
CL: Of course, Salif Keita or Eminem, Manu Dibango, etc. Nils Landgren, the jazz trombone player, we did a double concerto together; we do a lot of collaborations like this. The problem is that the classical music world, with a symphony orchestra, plans like 3-4 years ahead. So, I’m booked up for four years. In jazz, it’s about a month ahead. If you ask a jazz musician, “Ok, I would love to do something with you in 2021,” he’ll say, “I don’t know, maybe I’ll be dead by then.” (laughs)

VA: Is there something that nobody knows about you?
CL: Yes…well, to start with, maybe that I’m a pacifist in some ways. I believe that all countries and borders between countries should be completely erased because I think it’s part of why we have all these wars and tribalism—something I am completely against. I’m also completely against any kind of invention of a God or a religion that says there is something above; it simply doesn’t exist. The world is out there, it’s something that is unknown and should remain unknown until we find out the facts about it. And then, another thing, from the 1st of January, I took the decision to become vegetarian after seeing a program about killing animals. I have been thinking about it for many years, but traveling, I thought it would be very difficult to go to a restaurant and find great vegetarian food. However, when I saw this film, it’s called “Unity” by Shaun Monson, it made me become vegetarian and I just love it. I think it’s so superior to animal food and there’s no reason to kill animals at all.

...This Divine comes unexpectedly; it comes from discipline. If you search for it, you won’t find it.``